Mobile apps are the biggest technological revolution of the 21st century. So, it was critically important for us to get our footing right in the mobile app development industry. Within the first decade of mobile apps gaining prominence, it is clear that there are only 2 platforms dominating the world of mobile apps - iOS & Android. Both these mobile app universes have had hundreds of billions of app downloads so far combined. So, it was natural for us to have a dedicated team for mobile app development services. We develop native mobile apps for both these platforms. We’re here to create apps that address any and all needs of modern-day businesses and the great thing about mobile apps is that they are powerful tools regardless if you’re running a global enterprise or a budding startup.

We also wanted to get into cross-platform mobile app development in order to provide time-saving, cost-effective mobile app development options to our clients. But we didn’t want to compromise the quality of apps that we built in return. The early technologies in the domain of cross-platform & hybrid mobile apps development like Titanium Appcelerator, PhoneGap, etc. didn’t convince us much. There was a striking difference in the quality of apps created using them. But fortunately now we’ve got the technologies like React Native & Flutter Framework. With the advancements of Javascripts, these technologies now allow us to create apps that can rub shoulders with native mobile apps.

In the world of cool, first, there was rock n roll, then came the cigarettes, then the world saw iPods and now we’re in the era of the iPhones. That one device has catapulted Apple to become a trillion-dollar behemoth. People might argue about its features and design, but everyone would unanimously agree on the effect that it has had on the world of smartphones. Powering this wave with over 3 million different apps and billions of downloads, the iOS development community has become the backbone of this entire phenomenon. It’s nearly two decades now since iPhone apps were introduced, and still, there are no signs of slowing down.

From small boutique businesses to large-scale enterprises, to even presidents & prime ministers – everyone uses the iPhone for its amazing apps and the power of iOS SDK. Our iOS apps development team has had the privilege of creating several really cool iPhone apps as well as iPad apps. ECommerce marketplace, Personal Fitness, Financial Management, you name it – we’re the flag bearers of the phrase ‘there is an app for that’. Be it programming in Swift, or Objective-C, we’re absolutely in love with this platform and provide best in class iOS/iPhone app development services. With the new libraries that Apple keeps releasing with every new version of the iOS, we get more excited as it empowers us to develop iPhone apps that can do amazing things.

The discussion of mobile apps cannot be completed without covering the Android apps. In developed countries, both iOS and Android platforms are going neck-to-neck. But in developing countries like India, China, Brazil, and several African countries, Android apps have a staggering market share of over 80%. This clearly goes on to show the power of the Android platform. Despite having a heavily fragmented market of manufacturers and smartphone specifications, Android apps are powering economies in lots of burgeoning regions. With half the world still waiting for internet access, Android apps are only going to get more and more powerful in days and years to come.

There has been so much hype about these technologies ever since mobile app development became a mainstream domain. People in the app development community have been trying to come up with frameworks, libraries, development kits, etc. that allow developers to create mobile apps that are scalable to serve multiple purposes. It’s important to understand these frameworks don’t mean that you can develop mobile apps for both iOS and Android platforms with one codebase. That’s a common perception and an oversimplification of this domain. Yes, these frameworks do provide that feature, but even in the best-case scenario, only 80% of the codebase remains common for both platforms, there is 20% of native code and wrapping necessary to build apps on both platforms.

But that’s not the end of the story, these frameworks were built to help programmers extend that codebase to build apps even for the web platform. This means that you can write the core of your app and then develop mobile apps for it and also a web front-end for it. The hybrid mobile app development frameworks are embracing the philosophy of ‘full-stack development’, while cross-platform mobile app development technologies are focusing on making it a commercially viable option to build mobile apps for both platforms quickly and easily. We’ve waited long for these technologies to evolve and now is the perfect time to pick them up and run with them. Give us any challenge in React Native, or Flutter and we’ll come out with flying colors.

Got an idea? Well then, let's make a mobile app!

Did a prodigious idea hit you suddenly out of nowhere? Email us right away. The little problems we encounter in our daily lives can sometimes inspire great ideas. So, if you’ve got a proposition to discuss, we’re all ears! 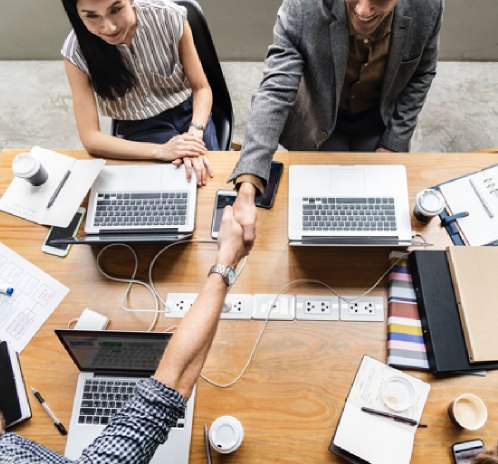 Stuck with an app that doesn’t work? Don’t give up just yet.

Got an app built from someone and you’re not getting any downloads? Does it need a makeover or does its performance need to be enhanced? Do you feel its user experience sucks? Well, we’ve got you on that as well. 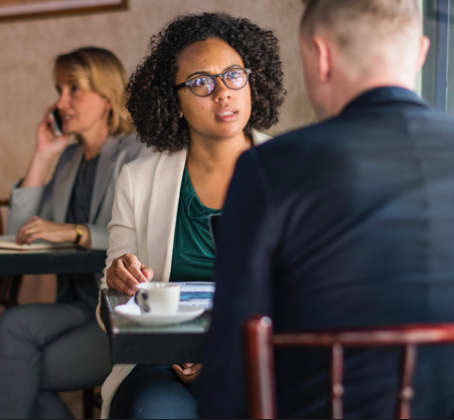 Thinking of giving your business the mobile app? Bang on!

Have you been mulling over a mobile app for your existing business? Or have been planning for ages to begin your startup and you need an app developed for it? There’s no better time than now! Let’s get you started.

No idea, or no app is too small, or too stupid. The only thing you need is conviction (and some cash, of course! :P). Leave the rest to us. We are passionate folks and we know what it takes to build a good solid app. We’ll believe you if you say that you’re the next Google. We’ll match your crazy chord and listen to your idea sincerely, and if it is exciting enough, we’ll be thrilled to get on board.

Questions in your head right now:

So, does that mean you can create a clone of Tinder?

Umm… No! We don’t make clones and it’d be wise that you don’t either. We do believe that the world needs another mobile dating app; another photo-editing app, but no, not an exact replica. There is no long lasting value to it. You might be able to turn a few eyeballs with a clone, but you won’t be able to build a sustainable business with it. Your app needs to have something unique about it. However little, it needs to have something that sets your idea apart from all the contemporaries. Your app should have a soul. It needs to be honest. It needs to add value.

Duh, how can an app have a soul?

Believe it or not, it’s true. This is precisely what separates a good idea from a great idea. The mojo, the secret sauce, the magic mantra of your app. It can be an algorithm, your research, or the content offering, it can be anything. It can be any aspect of your app that sets you apart from the lot. But you need not sweat about that. We’ll help you in that soul-searching process as well. Our project consultant will give you honest and proper consultation at every stage of production. Add to that our passion for mobile app development and the incredible skills of our Android and iOS mobile app developers and, who knows, your app might be the next Instagram, or next Netflix, with something unique about yourself!

Aren’t there enough apps built by now to do almost everything? Is there a place to build a new app?

This feels like that quote by Charles H Duell from the US patent office in 1899. He said, ‘everything that can be invented has been invented.’ In hindsight, we all know how stupid that sounds. Yes, in today’s times there are a plethora of mobile apps that can help you do almost anything from walking your dog to repositioning satellites. But the human race is always evolving and we’re always finding better ways to do things or creating completely new things altogether. In short, mobile app development services are directly proportional to smartphone usage. The more people use smartphones the more mobile apps will rise. There is always going to be space available for a cool new app. There’s always going to be people saying, ‘this app should exist!’

But I don't feel comfortable in discussing my idea with you, nor do I want people to know that an external agency is building my app.

That’s perfectly fine by us. We are happy to sign a Non-Disclosure Agreement with you and we’ll never whisper a word to another soul. Gentleman’s word! We respect your thoughts and your company’s integrity. We’ll work silently behind the curtain (ninjas that we are ;-)) while you run the show. You’d have the access to the latest and updated project repositories containing all project assets at all times. We’re not in this for glory or money. We are in it for the kick: the sheer love of making apps.

Okay, here’s the big question: how much is it going to cost to build a mobile app?

It may cost you thousands of dollars. Maybe more; maybe less. It is hard to say. It depends on a variety of factors like app size, mobile app development time, will your app be using any 3rd party technology or creating any new proprietary algorithm or IP, how much research it will require, the experience of our mobile app developers in the domain that your app targets, etc. We’d probably be able to answer this question to your satisfaction after we have a healthy discussion about your idea – and that won’t cost you a dime.

But how will I upload my app to the App Store?

Oh, we’ll take care of that too. We understand that submitting your app to the App Store can be a scary process, especially if you’re doing it for the first time. So, after we develop your app and test it thoroughly, like, really to its core, we’ll help you publish that app on the iTunes App Store and Google Play Store, or any other Android app stores where your target users exist. We’ve done it a zillion times before and we know all the inside outs of these app stores. All you’ll have to do is sit back and watch as the magic unfolds.

And what after my app goes live?

We’ll always be in touch. We create lifetime bonds through our work and are happy to be your go-to team for all technical and non-technical support. We’d even be willing to sign an Annual Maintenance & Upgrades contract. After your app goes live, it will need maintenance and a proper upgrade plan for at least the next 24 months in order to survive and thrive. If you’re serious about your app’s future, you’ll always need a full-time tech team by your side. If you like working with us and want us to be your full-time tech team, it would be an honor for us. We’ll also help you with marketing, strategizing, branding & local recruiting to ensure that your product has an upper hand.

I still have a lot of other questions.

Awesome! Get in touch with us right away and we promise to answer every single one of ’em.