Platform for students and schools to nominate themselves for various academic awards given out by Youth Arch Foundation.

Youth Arch Foundation is an organization that focuses on development of youth. They encourage young talents to contribute to the society by participating in various community activities. They organize an annual awards ceremony for promising school students; namely Hong Kong Outstanding Students Awards - HKOSA & Youth Arch Student Improvement Award - YASIA. The recognise deserving candidate and explore leadership potential for various award categories by organizing a wide range of activities and community services. They aim to provide a platform for the youth where they can interact, learn, and support each other. They focus all-round development of the students in terms of educational, personal, life, and career developments.

Before the client reached us, they handled all the process of filling out multiple application of the students for award nominations manually. The teacher or student has to fill out the nomination forms with the records of academic performances, extracurricular activities, community service, etc. They have a complex scoring system which helps them recognize deserving candidates for awards in various categories. They had to score each student manually for all the criteria which they could be awarded. This whole process was tiresome for their team, and it was getting difficult to handle it individually.

The client needed to develop a platform which can help them manage the HKOSA & YASIA awards and take the nomination process online. For HKOSA, the teacher can invite students and the student can fill the application form online. The student has to further invite the referee to fill a form which shows their relationship with the student along with few other details. These applications required teacher’s approval, upon which, the applications will be scored. For YASIA, they need a feature where the teacher fills out students’ application form, and further nominate them for awards. In YASIA, they required to evaluate the student’s based on their previous performances. They wanted to divide scoring in two parts: one by the system and the other needed to be done by marker. The onboarding process of the school and marker needed to be done from back-end by the system admin. The admin should also be able to assign applications to markers for marker-side scoring.

This is the module used for capturing student’s details for the Hong Kong Outstanding Student Award. The actors for this module are the Student, School and Marker. The process for HKOSA is as mentioned below: Students either access the portal themselves or are nominated by their schools. In the former case, the student proactively fills the academic and other details as shown in the portal as a form. In the latter case, the school, through their login, will be assigning a Teacher In Charge for HKOSA who will then invite the student to fill the form using their IDs in the system. Students fill in their academic results and conduct across all the subjects, community services they have been a part of, extracurricular activities they have undertaken, academic and non academic awards in the form. These information are prompted by the portal as different sections. Students will be entering a short self description which will act as an introductory pitch for them.

YASIA is an award which is given out to the students who have made the most impressive leap as a student in terms of achievements. These are those students who act as a beacon of inspiration to all the other students.

Unlike HKOSA, the applications for YASIA are filled by the Teacher In Charge and not the student.

The school’s TIC (Teacher In Charge) fills the academic details of students whom they select off the platform from their school. These details will be across academic, extra curricular, conduct and other parameters. These students are the ones who have had the best improvement in their performance. After the TIC fills the form, the admin will be assigning a marker for that application. The marker will be reviewing the application details entered by the TIC, checking for its validity and authenticity and then the system would showcase the awards and scholarships that the said student is eligible for.

School views all the submitted nominations

School fills up the nomination form 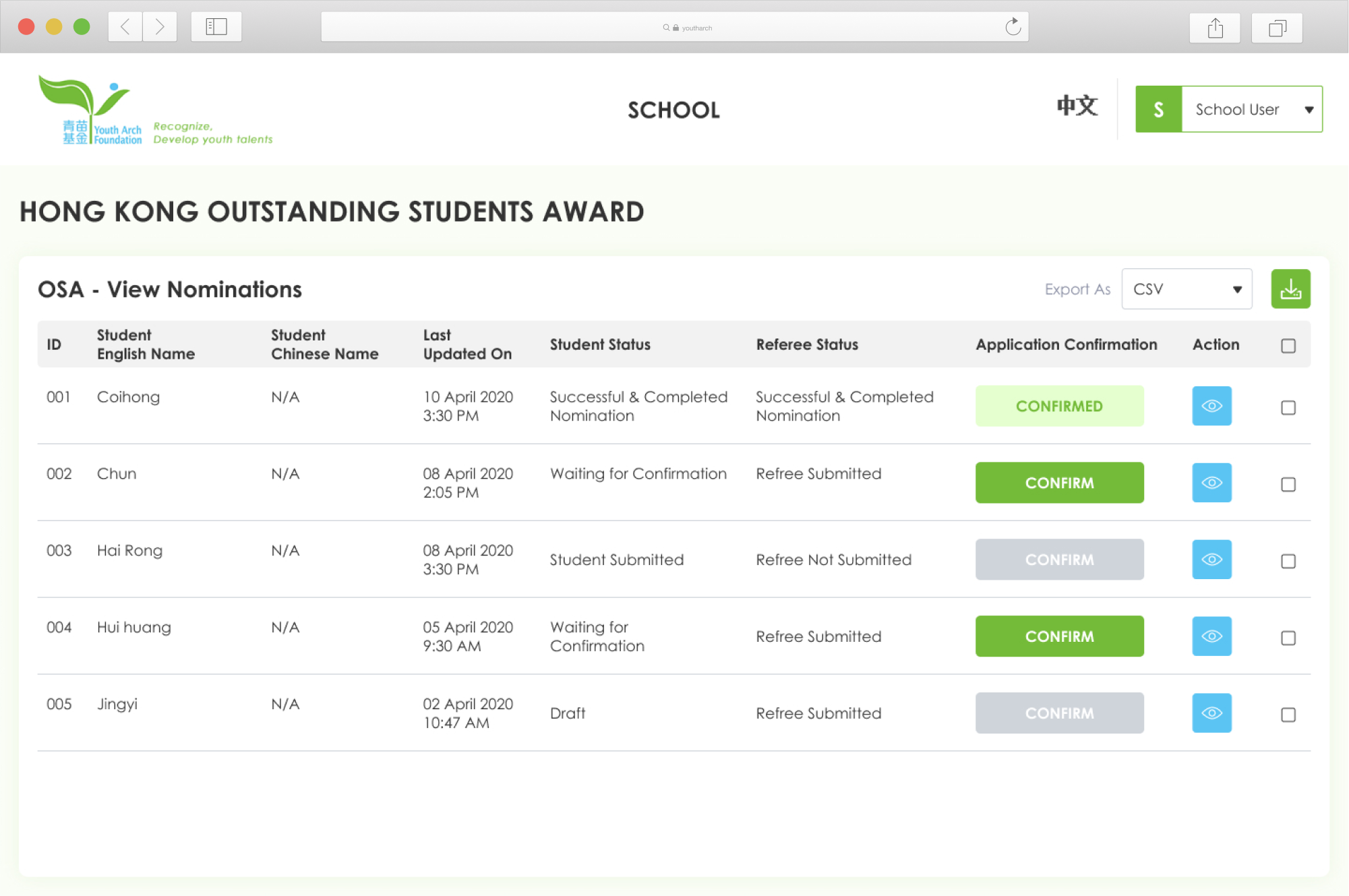 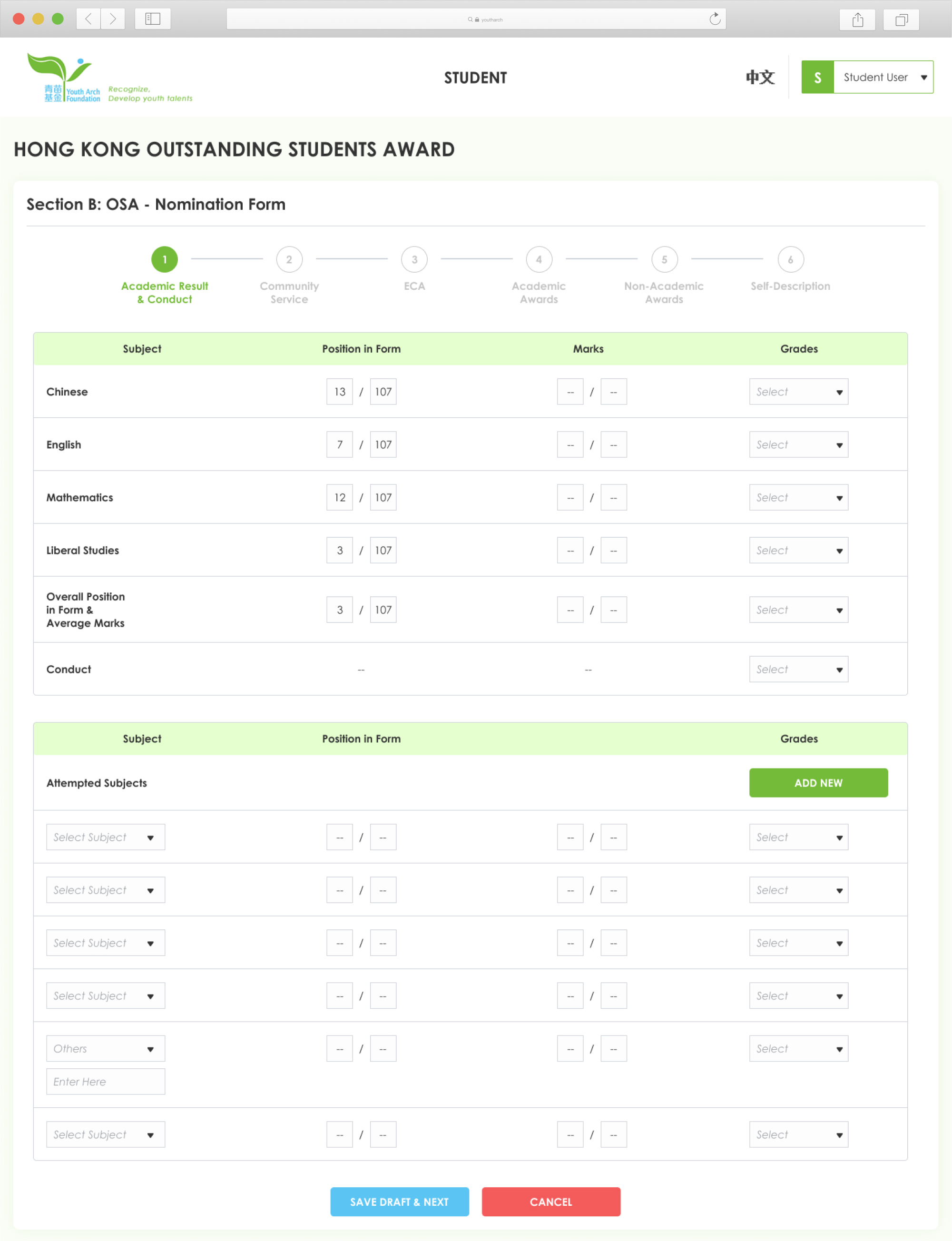 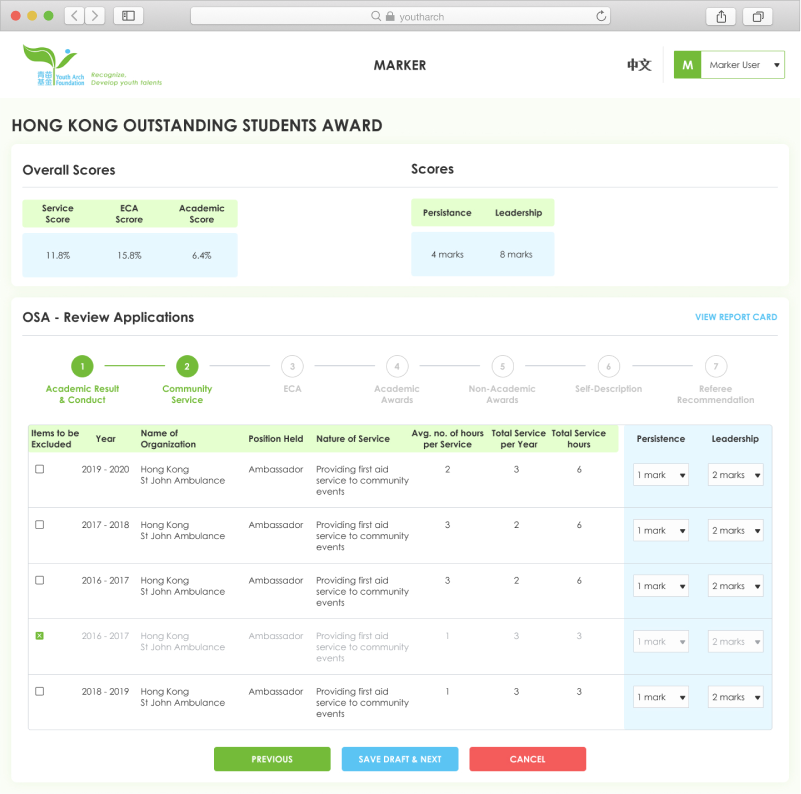 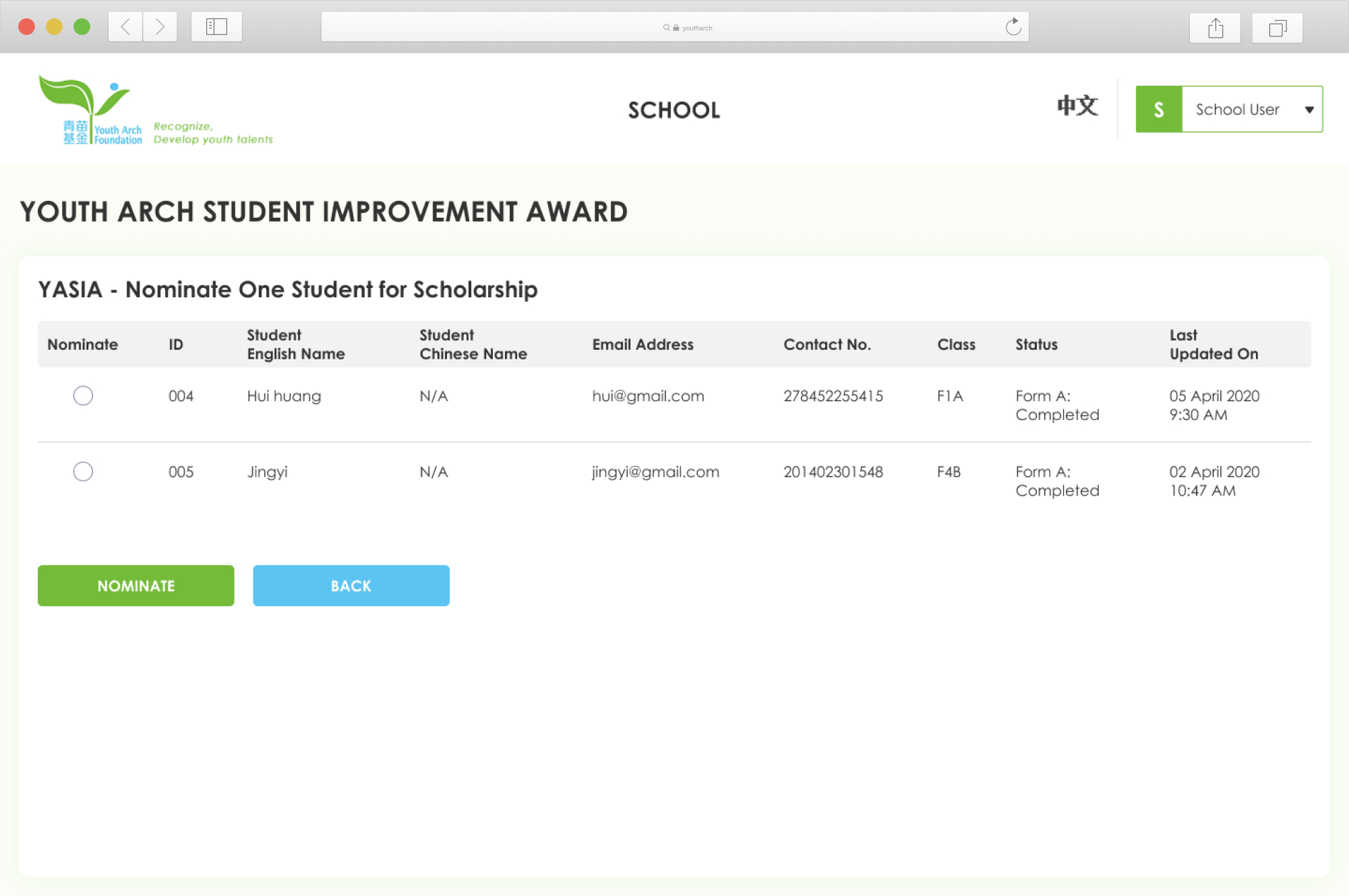 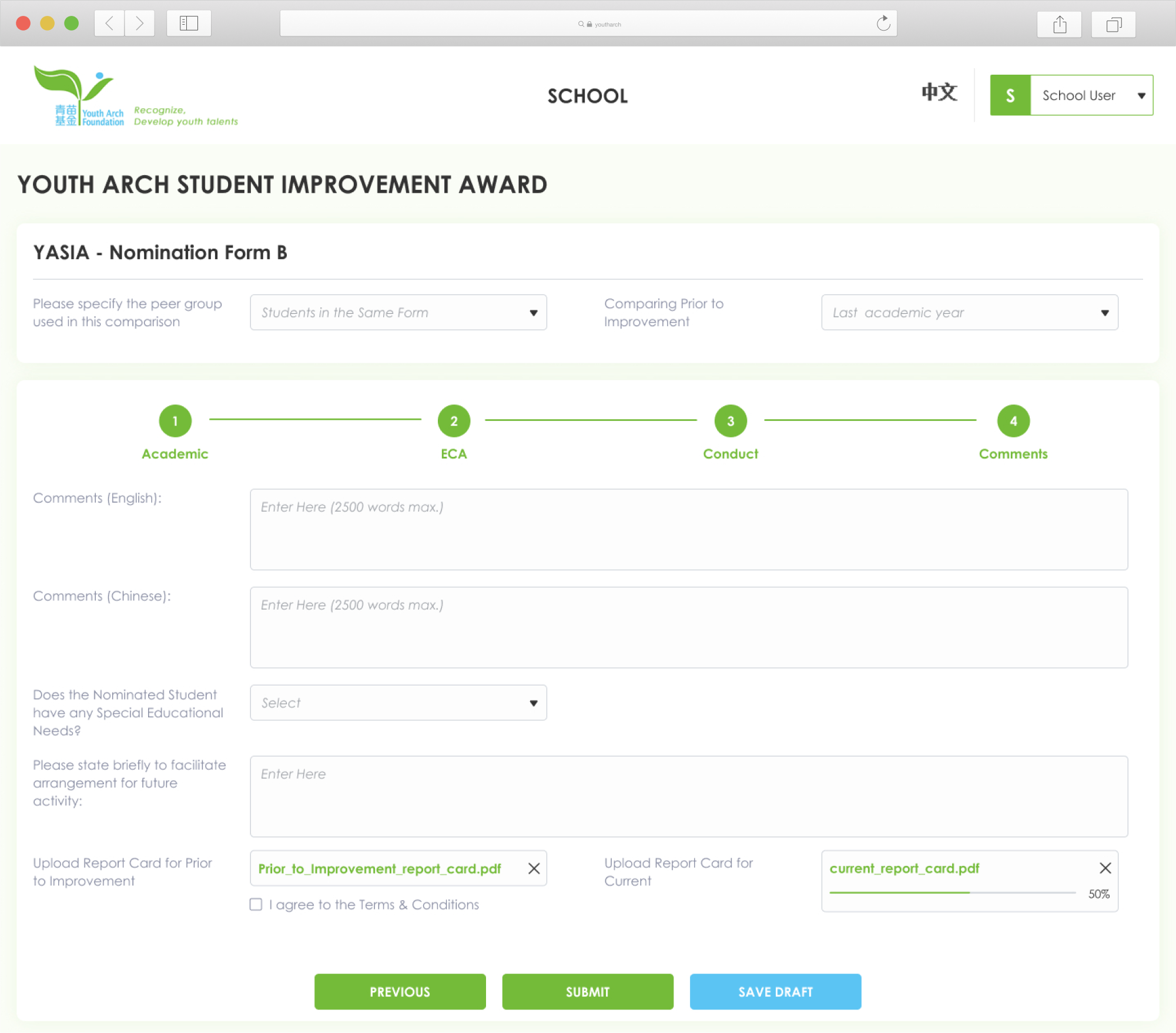 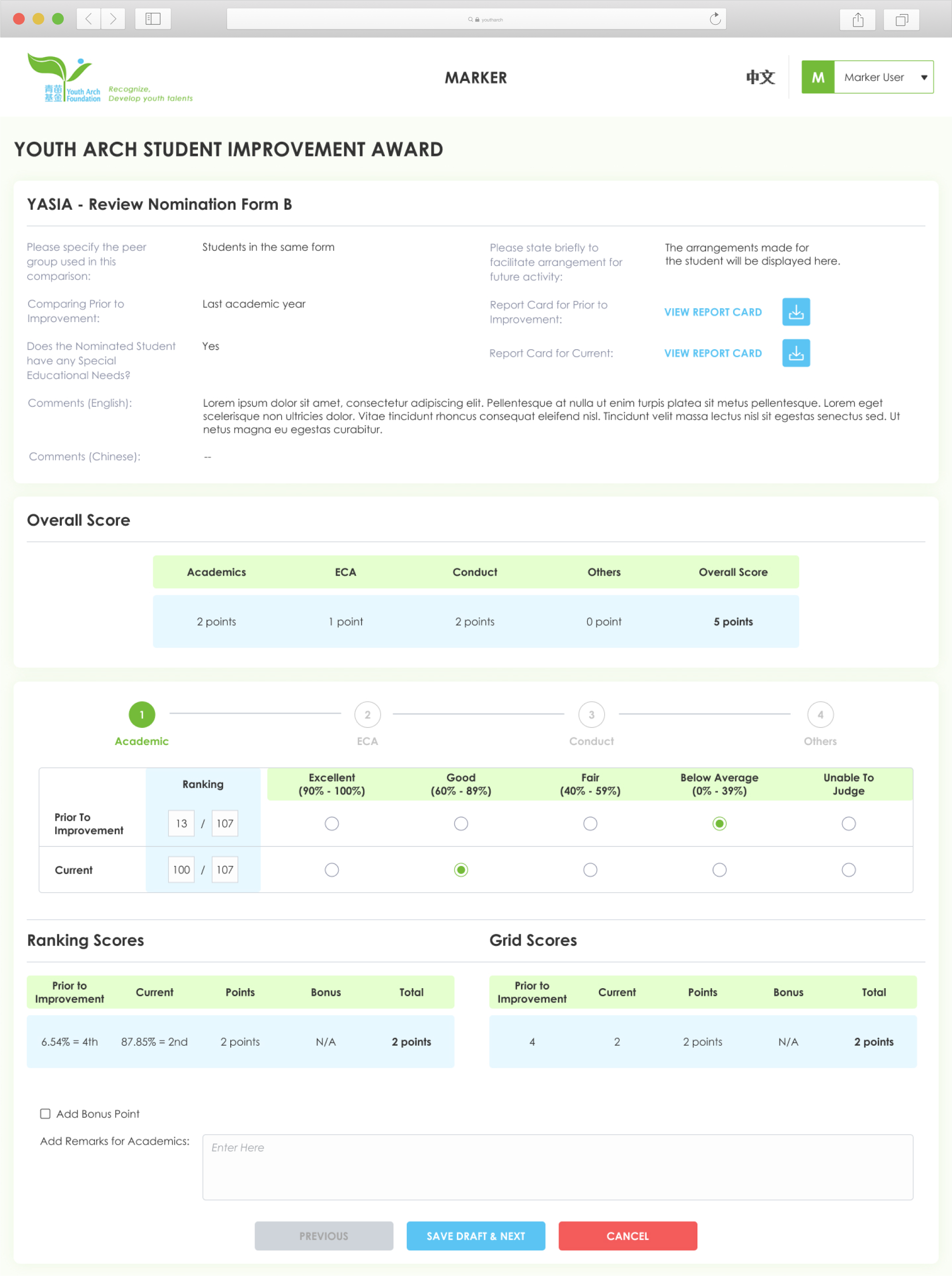