A network for travel enthusiasts for aggregating custom-made itineraries.

GoYellowBoots is a social network with a definitive purpose. It brings together all the hardcore travel enthusiasts and allows them to create, share & personalise travel itineraries and travel plans amongst themselves. It was launched as a crowdsourcing platform for collecting travel itineraries created and submitted by the registered users. Be it a backpacking traveller who wishes to travel places that are off the maps, or a family who wishes to travel on a budget but doesn't know of the right places to book, or someone travelling to a place for a quick business trip and looking for maximum networking opportunities - all of those people, among many others, could find the itineraries related to their requirement and plan their trip accordingly. The more users created more and more itineraries on GoYellowBoots, the more powerful the platform would get. It'd be able to capitalise on all that data created by the users and offer more user features that would enhance the travel planning experience for its users. Hence, giving GoYellowBoots it's USP.

GoYellowBoots is a young startup founded in 2017. The founding team were avid travellers themselves. They noted that there were several websites that let the users create their own itineraries after all their bookings were done. They were just a glorified versions of a diary. On the other hand, there were travel agents and similar websites that offered pre-planned tour packages for leisure and holiday travellers. It was travelling on a template-format which refrained people from exploring their destinations based on their interests and their preferences. Then there were the review platforms like TripAdvisor, and Yelp, and their likes. While they are great at reviewing places and travel and hospitality businesses, they are hardly of any use unless you know what exactly the user was looking for. They did a good job at informing the user on where they were travelling but they did little in suggesting the user on what should she visit. Thus, despite a plethora of websites in this domain, they left a significant void in the travel planning market which wasn't filled by any travel related portals.

Since this was a newly founded startup, the founders were looking for a team that could help them in turning their vision into a well-functioning software system. This was an interesting challenge for us as we had to create a fresh new interface after thorough brainstorming with the client's team. There was no previous material that we could study and refine upon. We had to start with a blank slate. This meant that our discussions with the GoYellowBoots team had to be extremely detailed so that we could document every single aspect of their vision into our notes. The other important aspect for the project was the research on the contemporary user interfaces. While creating a fresh new interface for any new system, there is a vulnerability that the designers and analysts might introduce an interface that has a very long learning curve for the end users. This leads to a failure of a product in attracting the first batch of users during the early stages of its launch. Thus, we had a challenge in front of us to craft a fresh concept into a system that's easy for users to use and adopt. 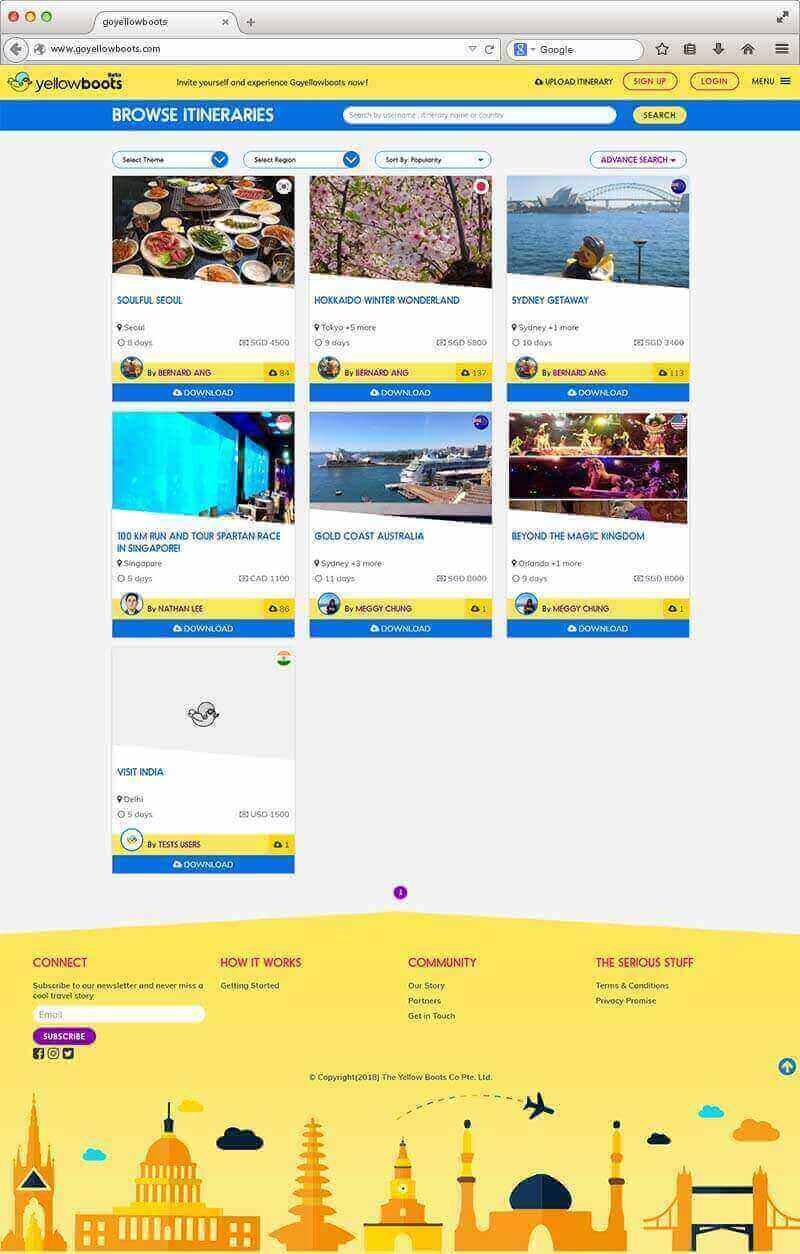 This enthusiasm from the users in submitting the itineraries was partly responsible to the gamification plan. As per that plan, the top level users could also charge a fee to other fellow users if they needed any specific customisations on any of their itineraries. Suppose a user found an itinerary about a backpacking trip to Himalayas uploaded by someone. Now, that itinerary features accommodation in Airbnbs. Instead of that, the user wishes to have his accommodation in local hostels. So, he'd contact the uploaded and request that customisation. The uploader would make the necessary modifications and the requesting user would pay a small fee for it. This gave the uploaders an opportunity to earn some extra cash and reward themselves for all the hard work that they put in creating and uploading all those itineraries. Also, it offered the other users in getting personalised itineraries for a nominal cost against a hefty commission charged by travel agents. Thus, it was a win-win for all.

Details for each Itinerary 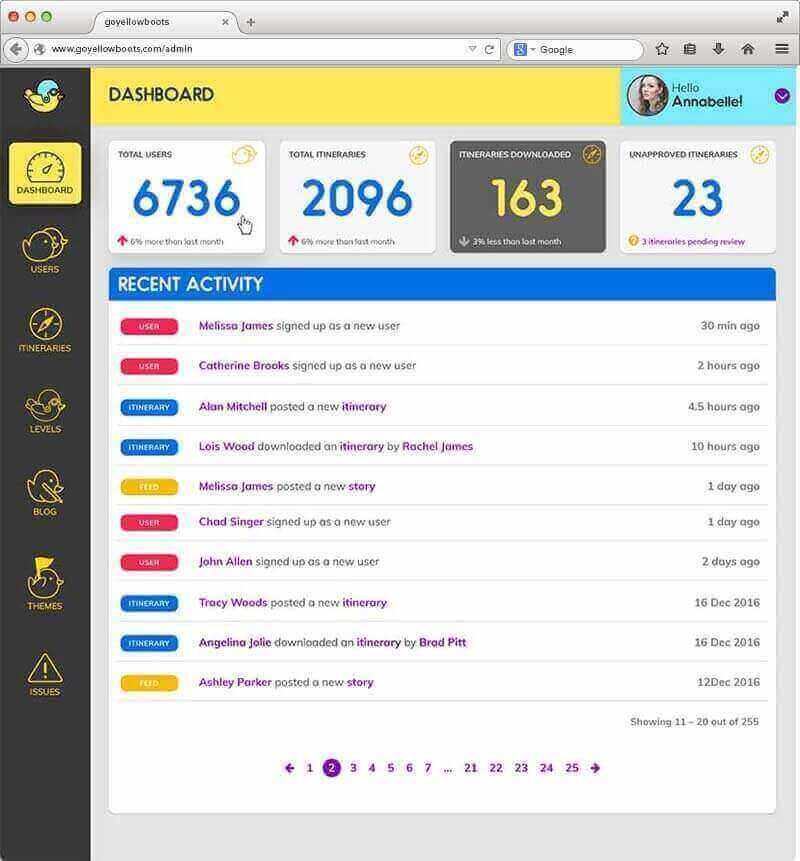 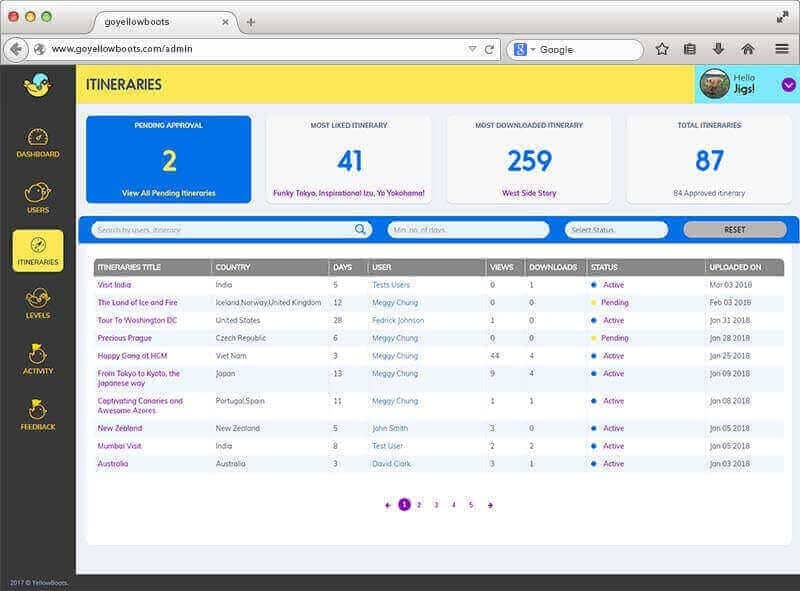 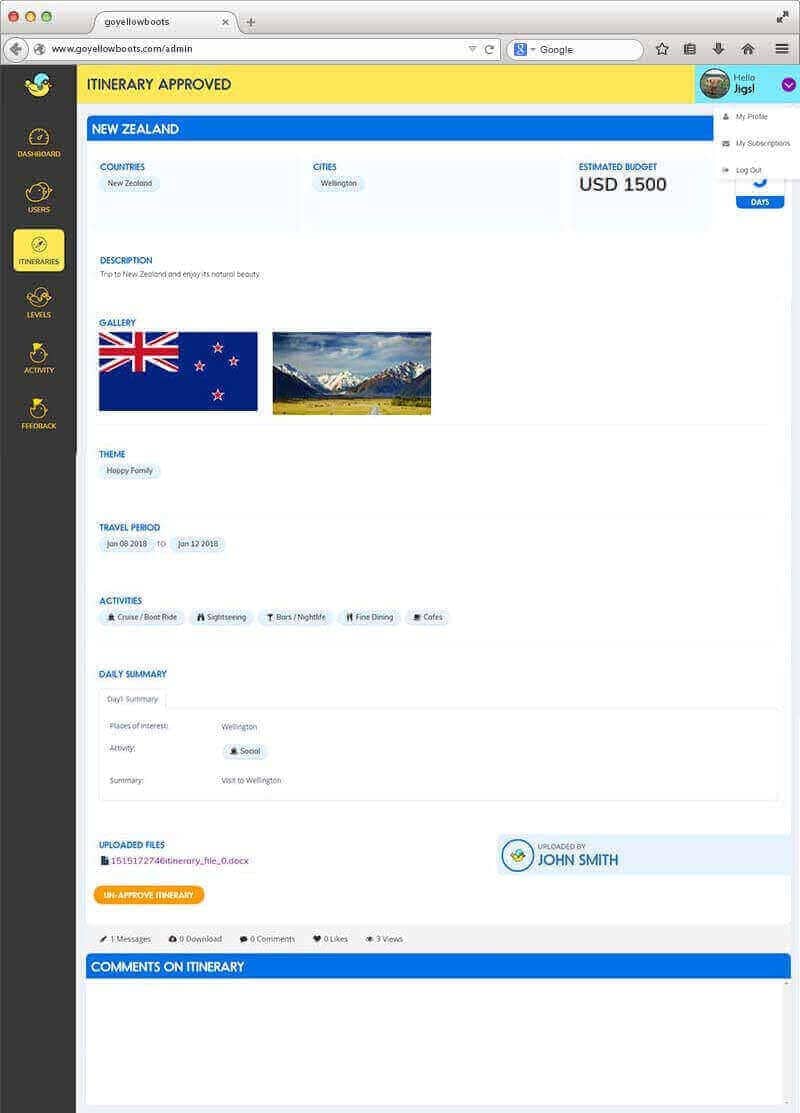